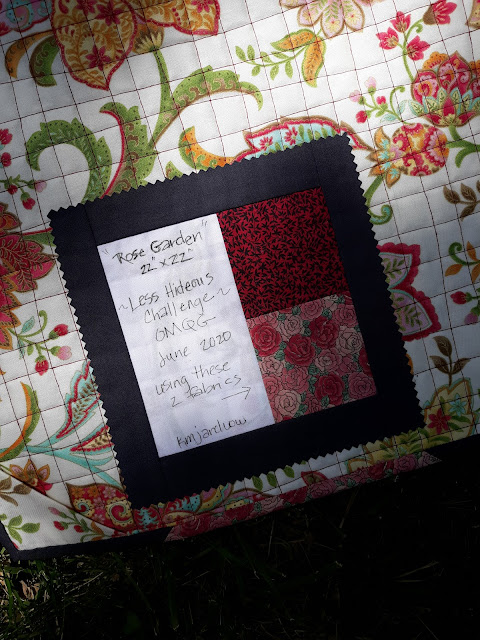 One of my local guilds set up a challenge where you pulled fabric out of a big bag of uglies. I picked the two above which I felt were lesser of all the dated fabrics. I kept them laying around until I thought what I wanted to do. It was hard because the bigger print would be hard to put in any kind of quilt block and it would still read traditional.
Then I figured I would have to improv a traditional block, in this case the 9 patch.
Also the colors, which are hard to tell on here, are pinky peachy in the large print and dark deep rosy red in the smaller print. The larger print has a touch of green which is the the complimentary color. If I went there, I would be in holiday territory. I didn't want that. I decided to put only a small amount of green in and pull out the peachy colors in the prints for a more analogous color set up. I chose grunge in both shades. 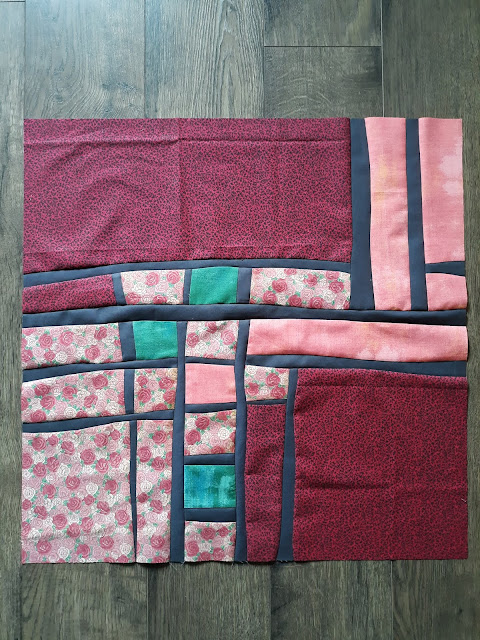 Then it was all about balance and proportion. I think my 9 patch idea shows through nicely. The dark gray instead of black helped too ...I think. 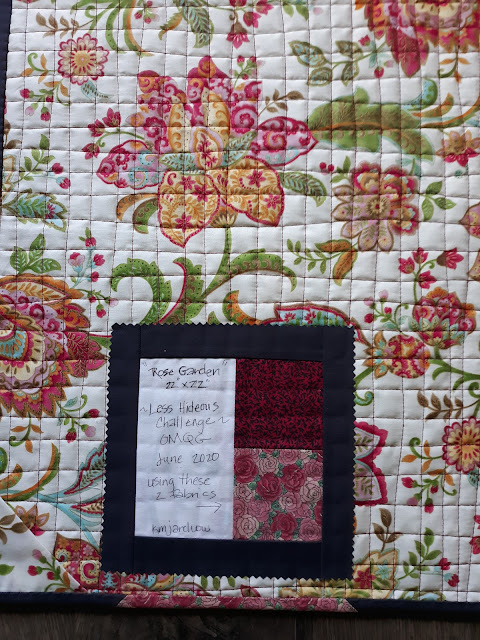 This backing was just a scrap that was close. I wanted to show off the quilting which is a really odd persimmon color but worked great. 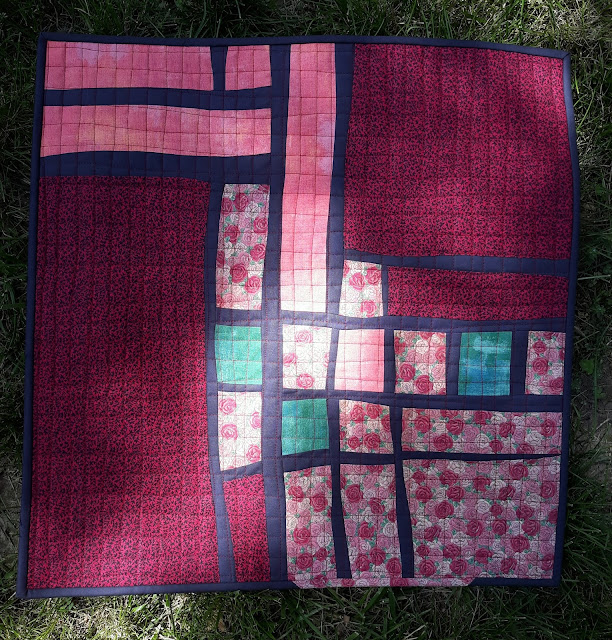 It reminded me so much of an english garden and so I named it Rose Garden. This challenge really was just that. How to take small dainty prints and make them into something that is modern and not modern traditional.
This shot was outside with a little sun on my garden.

Alycia~Quiltygirl said…
How fantastic!! I really like what you did with those fabrics and the extras you added made them look so different!! Too cool - and the title of your post - Less hideous - too crazy!
June 8, 2020 at 8:39 AM

Nann said…
Your delightful quilt proves the saying that if a fabric is ugly, just cut it up. Great design!
June 8, 2020 at 9:42 AM

Popular posts from this blog 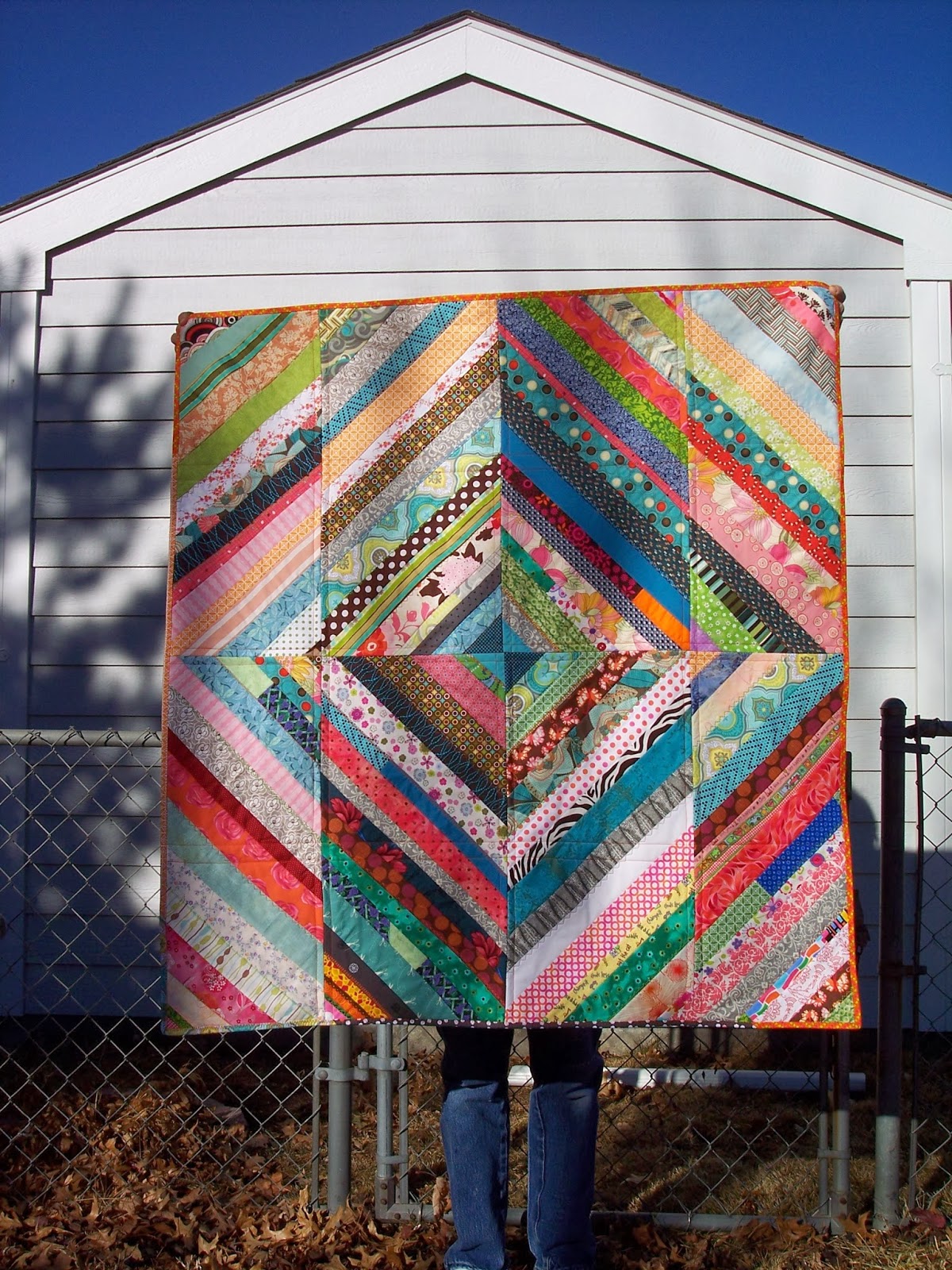 So excited that Kim over at Persimon Dreams is hosting Project Quilting again this year. It was so fun last year and I accomplished a lot.  This year I had so many ideas for this first Challenge. I wanted to do something more arty but when it came down to it I really need to make lap or baby size quilts for some of the charities I contribute to. I am sure I will do something more artsy before the challenge is over but for today I am going with a version of a scrap quilt.

The Challenge is "String Along with Me"

I used the same strip quilt as you go as I did in a quilt I made last Oct following Maureen Cracknell and her Herringbone QAYG quilt tutorial.
This was is called Scrappy II  it is 43 x 45. All scrap strings, scrap batting pieces and scrap binding. It might not be very creative but my scrap box is looking so much better!

(notice the fun fabric I found for the back...lovely dotty diamonds!) Simple quilting since each strip was quilted right to the batt. I did some decorati…
Read more 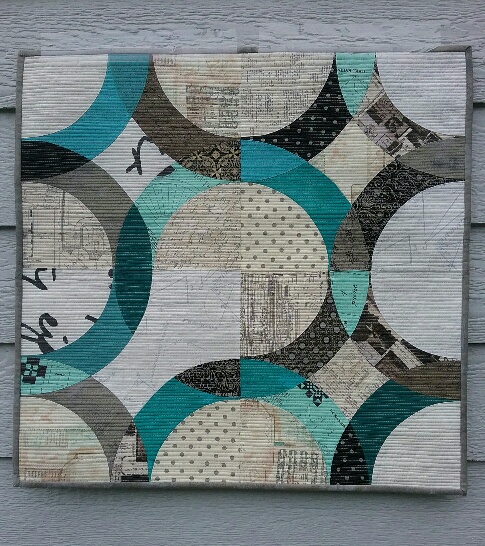 
I have loved this pattern since it came out and this is my third time in making the small wall hanging size.   It is really fun to make.  This piece was inspired by a piece of text fabric that a friend who happens to be co-chair of this quilt show, gave me a few weeks ago. It has text and sheet music on it. Then I found some fabric that has sewing pattern terms and quilt blocks on it. Some fabric with writing, photography, architecture and diagrams and put them all together to represent the makers of many beautiful things.


This wall hanging will be donated to one of my local quilt guilds for their quilt show auction coming up Oct 6-8 to raise money for the guild.   I might have to buy it back I love it so much! If you are in Lincoln Ne during that time stop by to see the show or bid on a favorite piece to own. 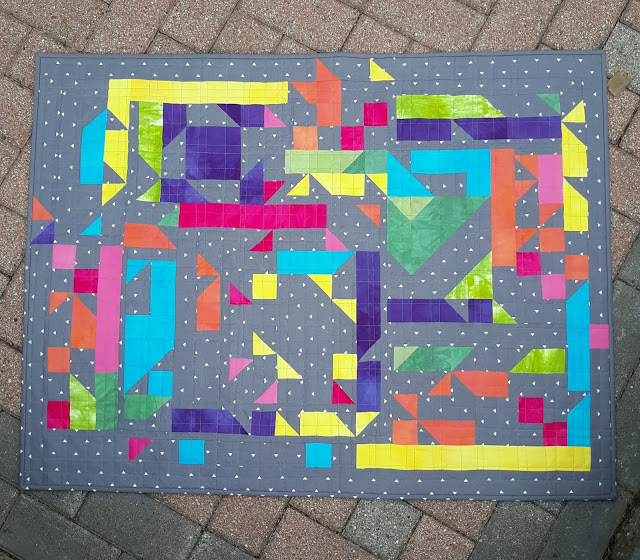 "Wherever the Wind Blows"  a study of positive and negative space 42.5" x 32.5"
Back at the beginning of the year my lqg had a modern block flip meeting. We brought blocks that were traditional and we flipped them to be more modern.  I brought different blocks and in the end only played with a few of them with other guild members.  I had in mind a few blocks I started in a BOM a few years ago.

These blocks were 12.5" and simple traditional shapes made as BOM for Blossom Heart Quilts HST Modern Sampler. (2016) My fabric choices were not great. I wanted to use the hand dyes I had made and I found this gray triangle fabric in a large enough quantity to go with the dyed fabrics. However, the fabrics all looked muddy and the values were too close. Also I felt like there was too much gray.  So when I was between masking making jaunts I grabbed the blocks and decided today is the day to do something....or see if I could.  As soon as I cut into the blocks, I saw the gray as…
Read more

Kris
Hi, I am Kris from Nebraska.(with a niece) I love being creative. I enjoy sewing and quilting and learning new things about these creative arts everyday. 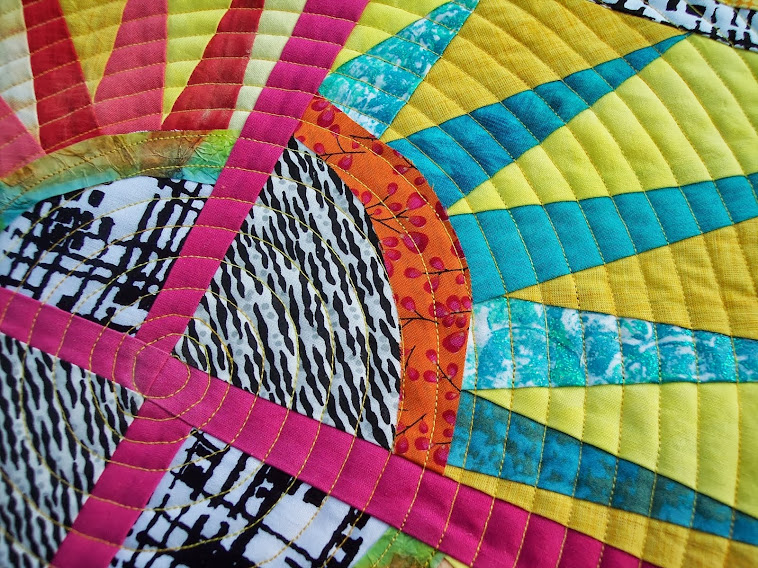 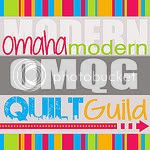